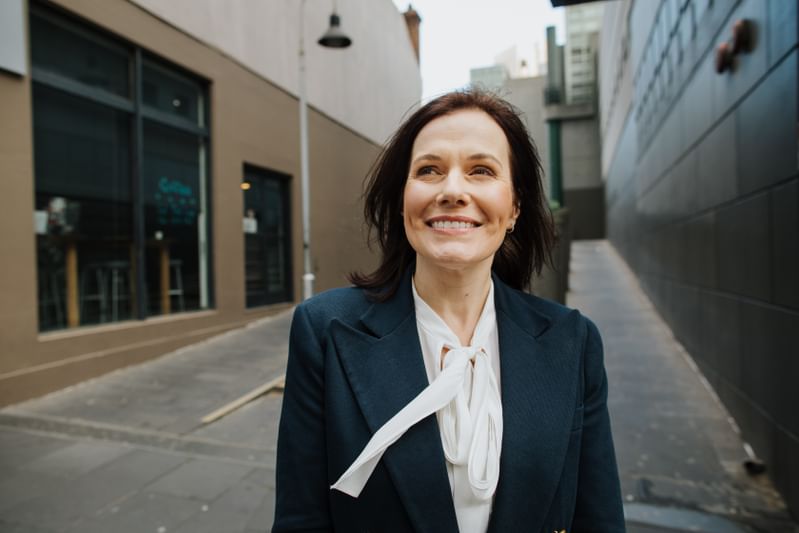 If you could learn any skill—and today you likely can—would you actually learn it? What if your employer was willing to cover any costs associated with the education required? Would you learn it then? While the answer may be an intuitive “yes,” there are often real-life barriers that get in the way of our hopes and desires. In order to uncover what these barriers are and find more about how ongoing education actually operates in the workplace, we jumped into intensive research.

Using an in-depth survey of more than 1,000 professionals in both the U.S. and Australia, we were able to uncover the modern truth behind educational opportunities on the job. We asked about the types of education they were most wanting to learn, how employers were helping them achieve this, and how satisfied they were with each approach. Whether you’re an employee looking to learn more or an employer wanting to encourage continued education among your team, you’re going to want to keep reading.

The Status Quo of Job-Based Learning

Our study begins with an analysis of exactly what learning looks like when the employer is involved. How things are financed, operations behind employee education, and continued education, specifically, are all discussed here. 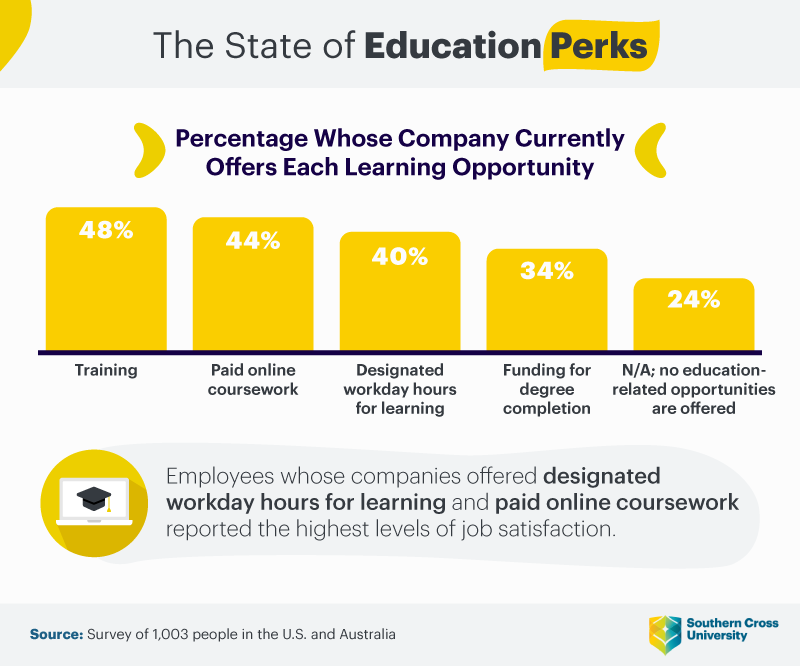 More than three-quarters of all employees benefited from at least some type of education from their employers. Typically, this was done through employer-offered training (48%), paying for online coursework (44%), or designated workday hours reserved for learning (40%). The latter two approaches were the most likely to incur the highest levels of job satisfaction among employees. 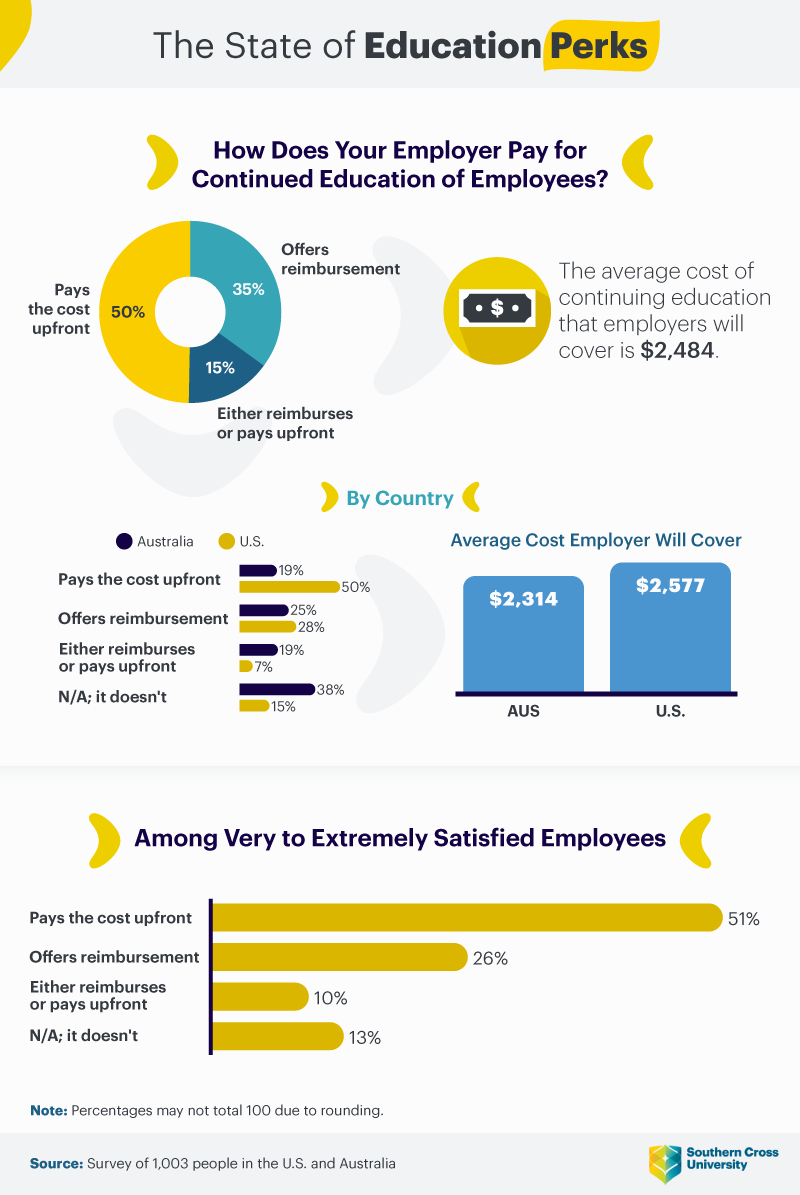 To front the costs of these types of education, most employers either paid for the cost upfront or reimbursed the employees after they themselves had paid. According to financial experts, expense reimbursement is an inferior method that puts an unnecessary strain on employees and wastes time and effort during the reimbursement process. According to our respondents, paying upfront was correlated much more often with satisfied employees. Companies in the United States were much more likely to employ the pay-upfront method than Australia, although both countries still had about a quarter of employees enduring the reimbursement method. 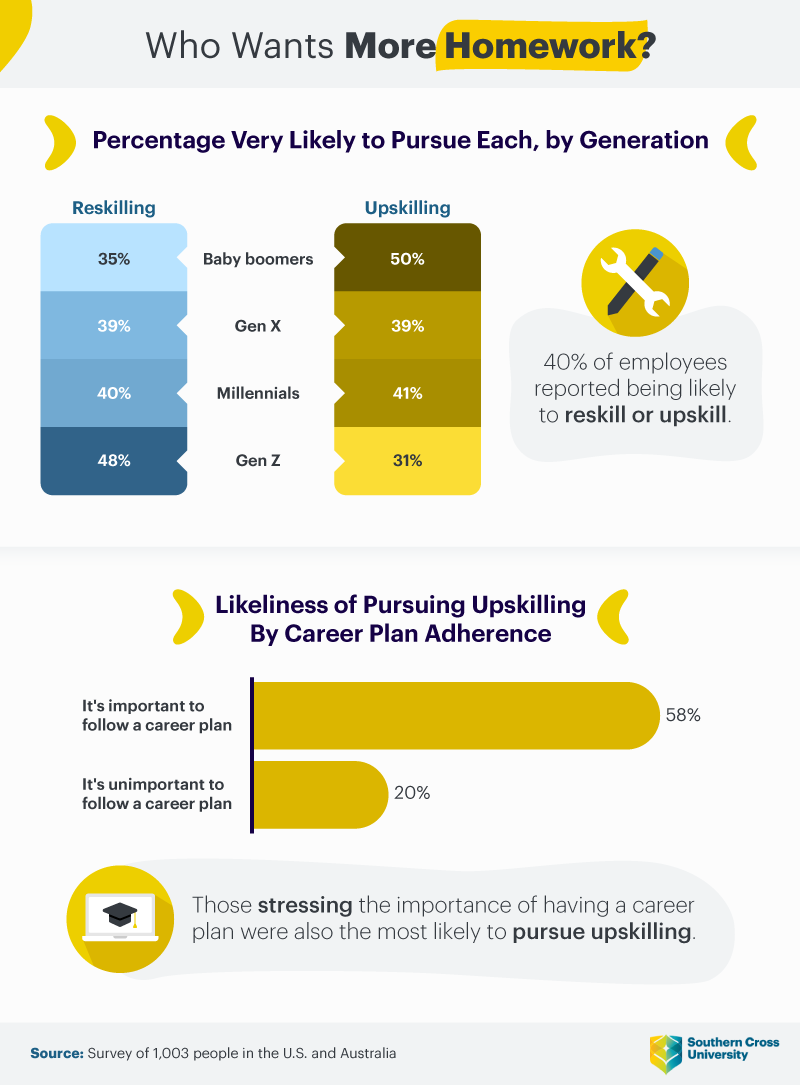 The younger a respondent was, the more likely they were to prefer reskilling as opposed to upskilling. This makes sense, as older respondents are more likely to stick with their current career in lieu of switching their roles and skill sets altogether. That said, more than a third—and sometimes upwards of half—of all respondents demonstrated interest in both types of education. On average, 40% of employees overall said they were highly likely to reskill and/or upskill at some point.

Staying the course in a career was definitely correlated with an interest in upskilling in this study. Those who stressed the importance of having a career plan were the most likely to actively pursue upskilling. In fact, we noticed a jump of 38 percentage points in likelihood of pursuing upskilling when career plans were important to the individual.

It’s worth noting here that a person truly can start a new career (or reskill) at any age. Even Wharton, the number one business school in the U.S., insists this is possible. They claim that 80% of people 45 and older think about changing careers, but only 6% go through with it. If your employer is offering to reskill you for free, don’t let age hold you back.

As we look forward to the new financial year, we wanted to give respondents a chance to reflect and share what they considered to be their most important areas for development. We also asked which growth areas they felt were most important to their career, specifically. 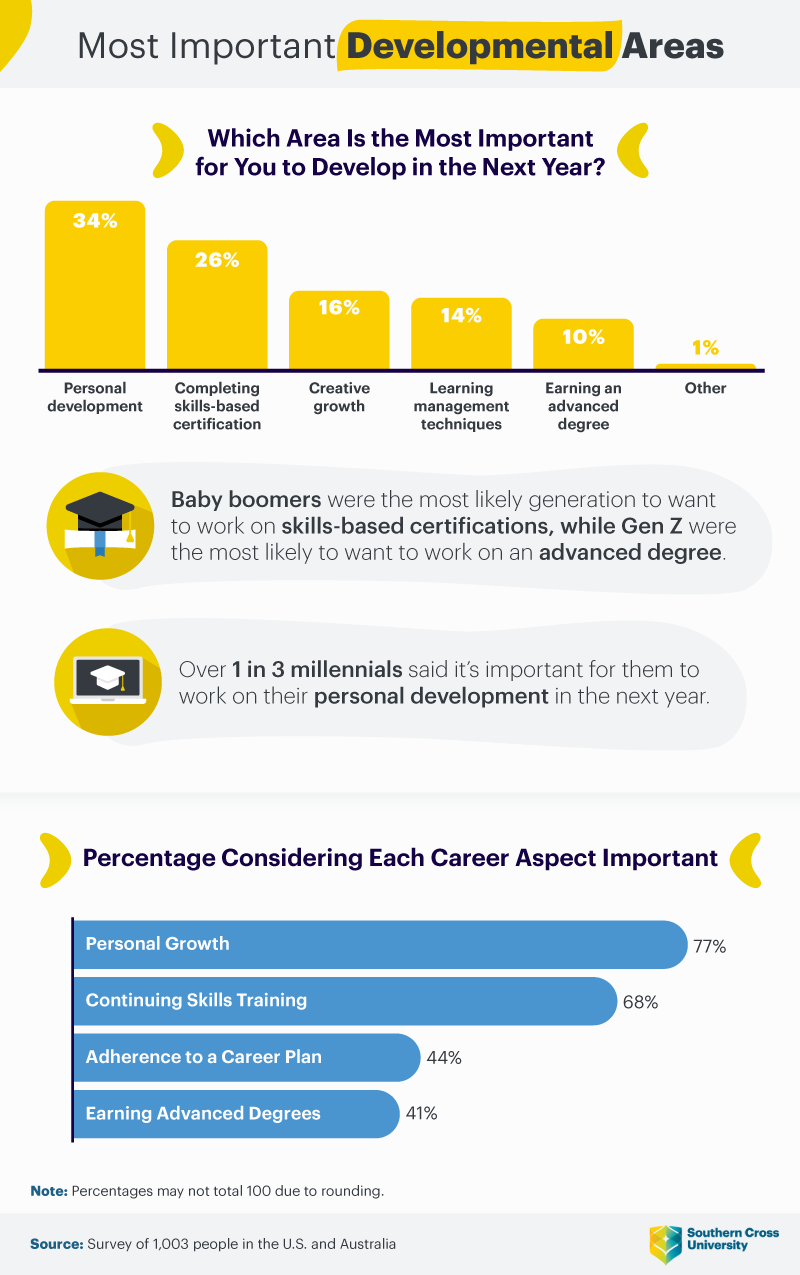 In the next year, more than one-third of respondents insisted the number one area most important for their development was personal development, and this was especially true for millennials. More than a quarter of respondents ranked skills-based training as more important than their personal development, especially baby boomers. Only 10% felt inclined to prioritize an advanced degree. While the conversation around advanced degrees has evolved and often devalued their importance, the Bureau of Labor Statistics still reveals that these credentials do correlate with higher salaries and increased job opportunities.

For careers specifically, personal growth became even more important than it had for overall life. More than three-quarters of respondents ranked this as the most important thing they could develop next year for their career. By comparison, only 44% considered sticking to a career plan an important aspect of their professional life, while just 41% felt an advanced degree was important for this purpose.

While (potentially) free education from an employer may sound like a no-brainer, our study concludes with a look into how employees really feel on the matter. They shared the pressures and limitations that exist to actually pursue new knowledge.

Pressure to continue education was not at all uncommon, especially so in the United States. Nearly half (45%–46%) of employees in the U.S. reported feelings of pressure to continuously learn more on the job. The fact that Australians were much more likely to hold professional degrees than Americans (80% vs. 20%, respectively) may have something to do with this relative absence of pressure.

When we asked about other factors that had prevented employees from pursuing education opportunities, the most common response that surfaced was a lack of time outside of work. With an estimated third of a person’s life already devoted to work, this is an understandable barrier to work-related education. This barrier was also related to the next three most common answers, which were a desire to maintain a work-life balance (46%), lack of time during the workday (46%), and an excessive workload (45%).

Employees in both Australia and the U.S. expressed definite interest and hopes for continuing education. Whether related to reskilling, upskilling, personal development, or career-related skills, education was something highly desired around the world. That said, barriers were perhaps more common. From a lack of time to too much work, employees were not often able to pursue ongoing education, even if their employers were willing to pay for it.

To help ensure that all respondents took our survey seriously, they were required to identify and correctly answer an attention-check question. Survey data have certain limitations related to self-reporting. These limitations include telescoping, exaggeration, and selective memory.

Feeling more educated already? That’s wonderful to hear. And it deserves to be shared! If you’d like to share this research, you are welcome to do so. Just be sure your purposes are noncommercial and that you link back to this page to provide proper credit.