Investing in Yourself for Work

In terms of preparing for professional success, there's no investment quite like higher education. University graduates earn far more than those who leave school after Year 12, and many thriving sectors, such as health care, are eager for more professionals with advanced credentials.

But while the right degree such as an MBA can open countless doors, education is just one of the many means to invest in your career. In ways large and small, professionals continually fund their own work success. For some, these expenses entail new clothing or cosmetics to help them impress colleagues and clients. Others pay to attend training events and industry conferences, while many seek the services of therapists and coaches to navigate work challenges.

We set out to study the investments that professionals make to further their careers, surveying more than 1,000 workers in Australia, the US and the UK. Our findings show which career expenses are most common and which seem to be most worthwhile. If you're considering how to invest in your own professional path, you won't want to miss what we discovered.

We began by exploring which career-related expenses respondents had accrued in the two years prior. Our results confirm that professionals at various stages in their career invest in their presentation and preparation on an ongoing basis. 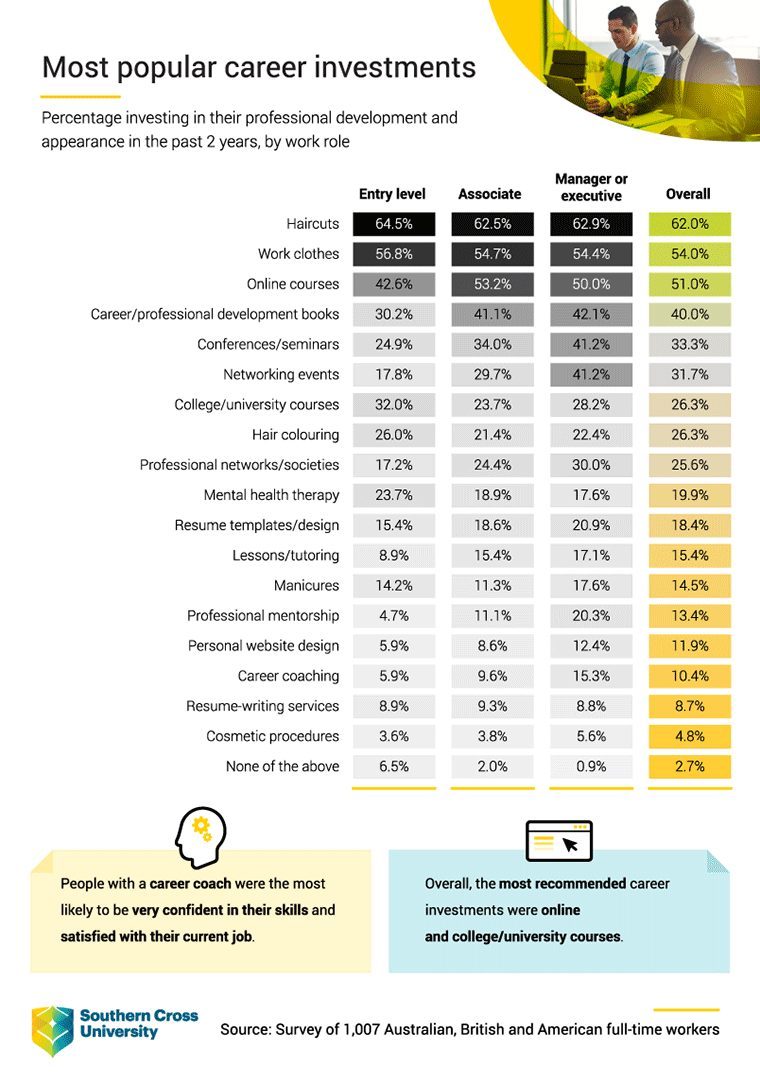 The most common career investments related to appearances: 62% of respondents had spent money on a haircut to maintain a professional look, and 54% had invested in new work attire. More involved beauty processes, such as hair colouring and manicures, were far less common, although a significant portion of respondents did undergo them for reasons relating to their career.

These investments may seem superficial, but much research attests to the presence of appearance-based discrimination in contemporary workplaces. Many professionals, especially female ones, experience immense pressure to conform to traditional beauty standards at the office – and regularly incur related costs. Our data indicates that this pressure is felt at all employment levels, from entry-level workers to executives.

Many professionals utilised learning opportunities that could lead to career advancement. More than half had taken online courses, for example, and this investment was one of the most recommended. Other kinds of learning were far less common but seemed to correspond with positive outcomes. Just 1 in 10 respondents had experienced career coaching, but those who had were the most likely to feel confident in their skills and satisfied professionally.

If most professionals experience at least some career-related costs, just how much are they spending each year on these investments? The answer seems to depend on one's professional status and approach to reach career goals. 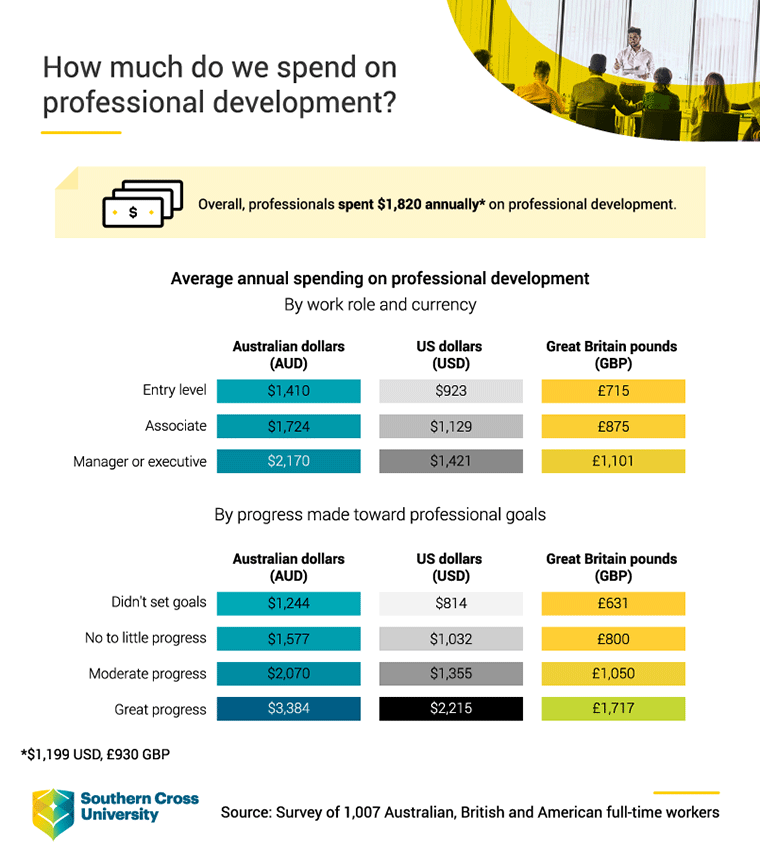 Overall, career-related costs seemed positively correlated with advancement: Managers and executives spent $760 (AUD) more per year on these expenses than entry-level employees. This correlation could be interpreted as an endorsement of career investments. Perhaps those who spend more on their careers ascend the corporate ladder more quickly.

Conversely, these results could simply show that promotions have a price: Managers and executives may have to spend more on items and services pertaining to their positions. For example, although workplace dress codes are increasingly casual, company leaders may still feel compelled to purchase and wear formal attire.

Additionally, professional spending seemed to align with current career progress: Those who felt they were making "great progress" towards their career goals spent an average of $1,807 (AUD) more than those making "no to little progress." Those who didn't set career goals had even lower career-related costs. In an era in which so many workers desire greater skills and better pay, our findings suggest that serious investment may be the key to getting ahead.

Return on Investment: Education and Other Expenses

Among respondents' various career-related investments, which were most beneficial? Our results suggest that opportunities for learning and personal growth are generally worthwhile. 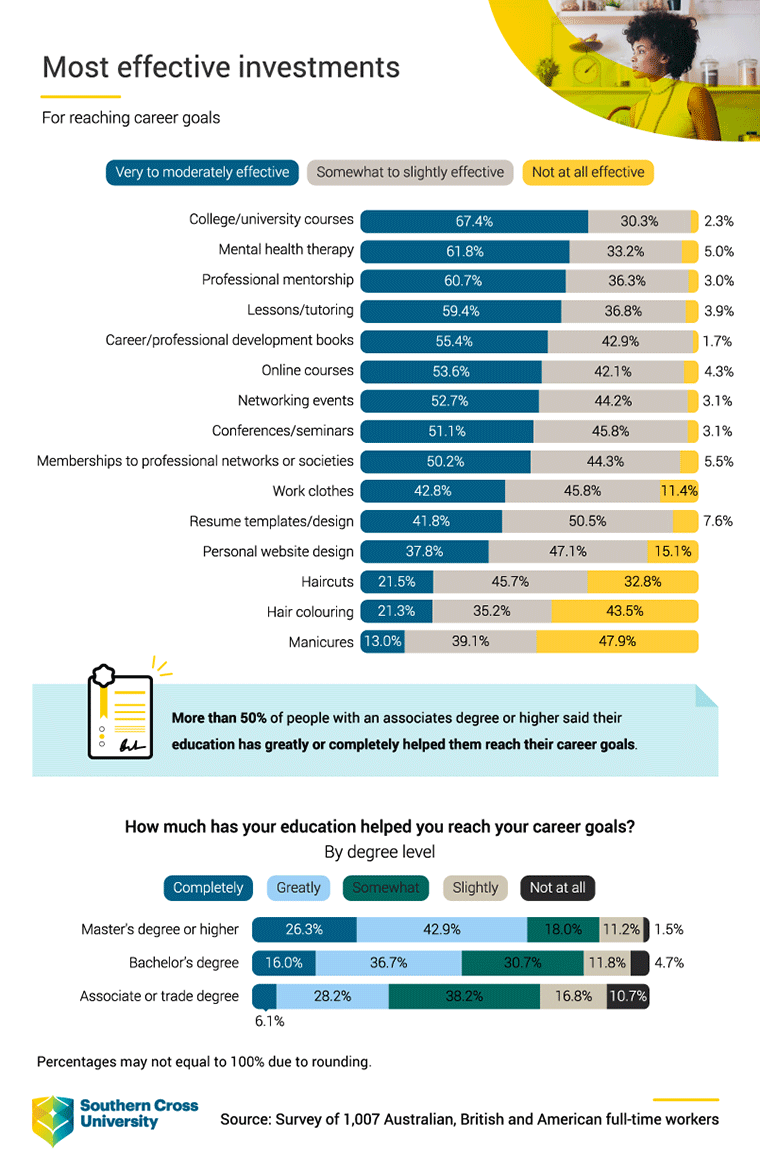 More than two-thirds of professionals who had taken courses through a university said these classes were "very" or "moderately" effective in helping them reach their career goals. In fact, a majority of those with an associate degree or higher said their education had "completely" or "greatly" helped them achieve their professional aspirations.

Although some degrees offer more promising employment prospects than others, earning a bachelor's degree can substantially improve your professional outlook. Respondents who earned a master's degree were even more likely to value their education, with roughly 70% stating their schooling "completely" or "greatly" helped them reach their goals.

Other kinds of investments also paid off for the majority of those who tried them. Of professionals who tried therapy, more than 9 in 10 felt it had helped them with their career to some extent. This particular choice can be challenging for working professionals because it can be difficult to schedule therapy sessions during the workweek. A similar portion found mentorship at least somewhat effective in aiding their career. Thankfully, many companies have now instituted mentoring programs of their own, supporting employees in forming these relationships.

Of those who had participated in career coaching, 61% had earned a promotion in the last two years. This statistic offers a strong endorsement of the career coaching industry, which has blossomed into a massive market in recent years. Professionals who had sought out mentoring were similarly likely to have been promoted, indicating that personalised guidance can be an invaluable asset for aspiring professionals.

Tutoring and lessons also correlated with a higher-than-average chance of getting promoted. So did courses taken through a university, although this method was associated with higher price tags (reflecting the costs of tuition). Networking opportunities also seemed to raise one's likelihood of getting promoted: Of those who had attended networking events or joined professional organisations, half had been promoted in the last two years. Indeed, while many network outside their current company in order to meet potential employers, it can also be effective within your own organisation.

Interestingly, mental health therapy was not associated with higher-than-average rates of being promoted, despite our respondents feeling it was an effective means to advance their career goals. Perhaps the benefits of this investment are more incremental and extended, helping professionals reach their goals over longer periods.

What stops professionals from devoting more time and money to their careers? Our data presents several practical barriers to career investment – including work itself. 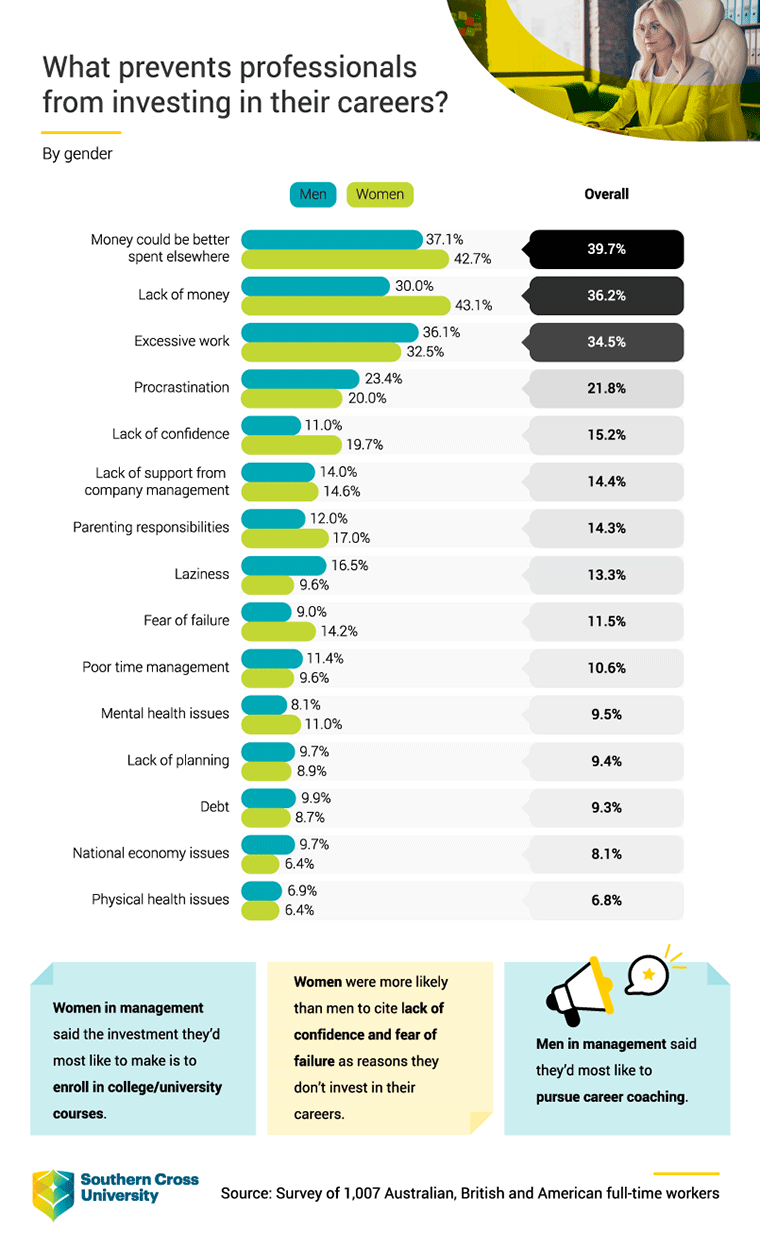 The most common reason for not investing in one's career was quite simple: Respondents had more pressing or appealing ways to spend their cash. Similarly, 36% said they didn't have the money to do so. These concerns are certainly understandable: At a time when so many families live paycheck to paycheck, it can be difficult to save up funds for one's professional future. Moreover, women were more likely to report these barriers to career investment, which could reflect the lingering gender pay gaps in the US, UK and Australia.

Other gender contrasts also emerged: Whereas women in management were drawn to advance their careers through university courses, men in the same positions said they would most like to invest in career coaching. Additionally, women were far more likely to cite a lack of confidence and a fear of failure as reasons for not investing in their own careers. These doubts likely reflect problematic gender norms and may prevent many women from achieving their professional potential. Research indicates that men typically overestimate their professional abilities, whereas women downplay their own.

Another common explanation was that respondents had too much work to invest in their career advancement. This data point may attest to the cyclical nature of burnout: Professionals toil with unreasonable workloads and then are too exhausted to take the steps necessary to change their employment situation. Perhaps investing time and money in one's career may be the key to breaking this pattern, empowering professionals to pursue more balance.

Our findings emphasise the career expenses that often go overlooked, from the price of professional attire to the costs of conferences and networking events. Yet, the most valuable investments, according to our respondents, tend to be powerful sources of learning and support.

Most professionals regarded their education as highly helpful to their career goals, especially if they earned an advanced degree. Additionally, most who sought therapy or professional mentorship found these resources effective. Unfortunately, our results show that financial limitations and time constraints often prevent professionals from making these investments. How can workers make these wise investments while also meeting their daily obligations?

Southern Cross University helps professionals pursue educational opportunities on their own terms. Our renowned academic programs offer a flexible array of options for earning a postgraduate degree or certificate 100% online. Discover how our distinctive approach to learning is built for real life and how our programs can change your career trajectory.

16.3% of participants were entry-level workers, 39.4% were associates, 34.2% were managers or executives and 10.1% were owners or partners. 44.7% had a bachelor's degree or the equivalent, 20.1% had a master's, doctorate, or other professional degree, 13.1% had some college credit but no degree, 13.1% received an associate or trade degree and 7.5% had a high school diploma. The remaining 1.5% did not complete high school.

For this study, we asked participants to enter, based on their local currencies, how much they'd spent on professional development. All figures (pound sterling for UK respondents and US dollar for American respondents) were converted to Australian dollars based on the exchange rate at the time of the study (February 2020). At that time, 1 GBP was equal to $1.97 AUD, and $1 USD was equal to $1.55 AUD. Outliers in all numerical data were excluded.

In the survey, we asked respondents to specify how much they'd spent on career development activities over the last two years. To simplify our visualisations, we divided the amount they spent in two years by two to represent their annual spending on career investments.

Our data are based on self-reported data, which could be influenced by telescoping, recollection of past events, exaggeration or minimization. It is based on means alone.

We hope this project prompts conversations with your friends and colleagues, empowering you to consider which investments might further your career. Accordingly, we welcome you to share our work with anyone who might enjoy it. We do request that you use our findings and images strictly for noncommercial purposes. Additionally, please link back to this page whenever you share our work so that others can access all our results.