Deciding to get an MBA (Master of Business Administration) is a big deal; it’s a significant investment, both literally and figuratively. An MBA can open up doors to a more fruitful and successful career path and can be a rewarding experience in many different ways.

It’s also a major decision and one that often involves choosing a specialisation. That specialisation can inform your career and dictate what you get out of your MBA program. With so many specialisations to choose from, navigating it all can be difficult. To better understand how specialisations impact people’s paths, why they choose the ones they do, and which programs are most beneficial, we surveyed MBA graduates as well as those currently in the process of getting theirs.

If you’re interested in learning more about the nuance of MBA specialisations, read on.

There are upsides and downsides to pursuing a specialised MBA program, and it ultimately depends on how you want to proceed in your business career. A general MBA can be a great way to gain a broader knowledge of business if you’re not set on which direction you want to take. On the other hand, specialising ensures a path toward a specific field and guarantees a level of expertise in that field that others might not have.

That said, we wanted to get a sense of who in our study chose a specialised MBA program and why.

The majority (69.3%) of our respondents chose a specialisation, while 30.7% did not. Among those who chose a specialisation, finance, technology management, and general management were the most popular. It’s perhaps not surprising that finance was the top choice for MBA graduates who pursued a specialisation, seeing as finance is an extremely lucrative field that pays well for even entry-level employees. Potential employees with an MBA specialising in finance surely have a leg up for some seriously well-paying jobs.

The average age that respondents of our study started pursuing their MBA was 27 years old, which makes sense given that many people do so after getting a few years of work experience under their belt after their initial college career ends.

“Why?” Is the Question

Everyone has their reasons for choosing a specific career path, and it’s no different with MBAs. One size certainly does not fit all, and there are many factors that inform whether an MBA program is right for you and whether it’s worth the time and investment involved.

One of the most important questions we asked in our study was what motivated people to make such a major life change. 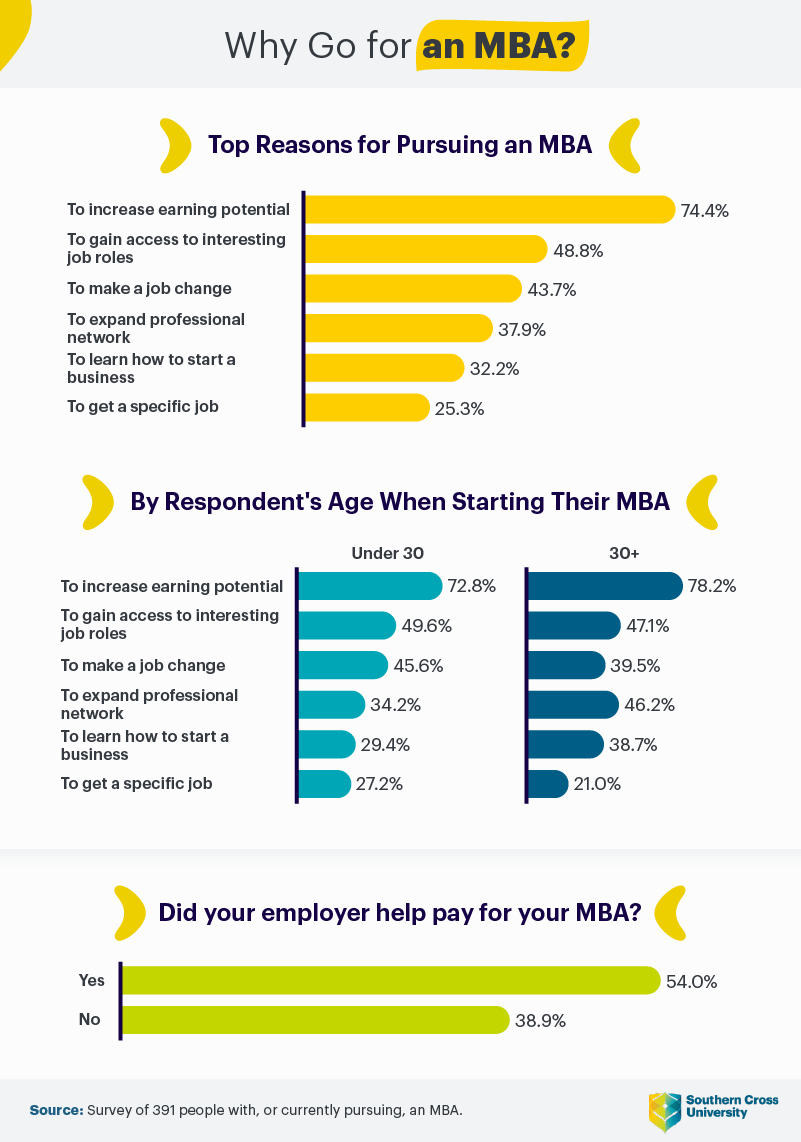 The biggest reason people pursued an MBA, both generally and when broken down by age, was to increase earning potential. Specifically, 74.4% of all respondents cited this as their top reason, while 72.8% of those under 30 years old and 78.2% of people aged 30 and up did the same.

The truth is, it’s not uncommon for people upwards of 30 or 40 years old to pursue an MBA, and there are many different reasons for doing so. Among our respondents across all age ranges, 48.8% said they pursued an MBA to gain access to more interesting job roles, while 43.7% said they did it for the purpose of making a job change.

There are, of course, many ways to develop a skill set, but specialised MBAs are particularly designed to give you expertise relevant to your desired career path and help propel you to higher-level positions more quickly. We wanted to find out the precise reasons why some of our respondents chose a specialised MBA.

As it turns out, skill was a priority among respondents who specialised, with 47.6% saying their primary reason for choosing to do so was to grow a specific skill set. Another 46.5% cited strengthening leadership skills as a major motivation, while 33.2% said they chose to specialise in order to pursue a new and specific job title. There are many specialisations out there for MBA students, and some will certainly help you get just about any job you could dream of in your field of expertise.

Interestingly, 24.6% of respondents cited their employer paying for their MBA program as the reason they decided to specialise. A whopping 82.5% of MBA students who received tuition assistance from their employer specialised, compared to 56.6% of those who weren’t subsidised.

Was It Worth It?

There are different schools of thought on whether advanced degrees are worthwhile, but the general consensus is that they ultimately pay off—quite literally, considering the financial advantages offered to MBA graduates versus those with a bachelor’s degree. Of course, it’s always best to hear from those who’ve been through the process themselves. We also asked our respondents about the particular benefits and drawbacks of choosing a specialised MBA.

Of the respondents in our survey who had completed their MBA, 89.1% said it was worth the effort that went into it. When broken down by whether they specialised, 92.3% of those who chose a specialisation said they felt their program was worth it, compared to 79.6% of those who didn’t specialise.

Furthermore, a notable 74.6% of graduates said their job title had changed, signalling that many people have their life altered significantly by pursuing an MBA and potentially even landing their dream job as a result.

Ultimately, whether you choose a general or a specialised MBA depends on your vision for the future and what you intend to do with your degree. Our study showed that those who chose a specialisation had very specific reasons for doing so, and, in the end, they felt the time, effort, and finances they invested in pursuing it were worthwhile.

To help ensure that all respondents took our survey seriously, they were required to identify and correctly answer an attention-check question.

Survey data have certain limitations related to self-reporting. These limitations include telescoping, exaggeration, and selective memory. We didn’t weight our data or statistically test our hypothesis. This was a purely exploratory project that examined trends in MBA degree paths.

If you’re curious about a specialised MBA and appreciate our findings, you are welcome to share them! We just ask that you link back to the study and that your purposes are non-commercial in nature.